If a map is drawn such that each point on the boundary of a region is surrounded by an even number of regions then the map can be coloured in two colours.

That means that two colours are sufficient to colour such a map so that no two regions that share a common border are coloured with the same colour. 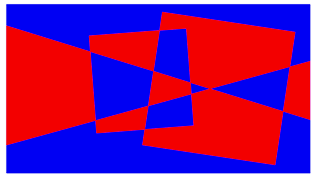 The theorem is equivalent to stating that all maps drawn with only infinite lines or closed loops are two colourable.

A proof by induction could be formed using this induction step: